The scope of discsussion will be limited to how the bureau handled the Clinton email investigation, according to Rep. Jim Jordan (R-OH), and will likely avoid conflicting with special counsel Robert Mueller’s ever-morphing Trump-Russia investigation.

Congressional Republicans have sought Rybicki’s testimony for months on the hope that he can provide key information supportive of President Trump’s decision to fire James Comey, while Democrats have called the GOP investigation an effort to undermine the ongoing Mueller probe.

Last fall, Senate Republicans released a partial transcript of an interview with two FBI officials – one of whom Senators Grassley (R-IA) and Graham (R-SC) believe to be Rybicki. During the interview, investigators were told that Comey decided in early May 2016 to draft his exoneration of Hillary Clinton.

Rybicki, as it turns out, was involved at some level in the crafting of Hillary Clinton’s exoneration – which downgraded Hillary Clinton’s mishandling of classified information and use of a private server from the legally consequential phrase “grossly negligent” to “extremely careless” – not a legal term of art. 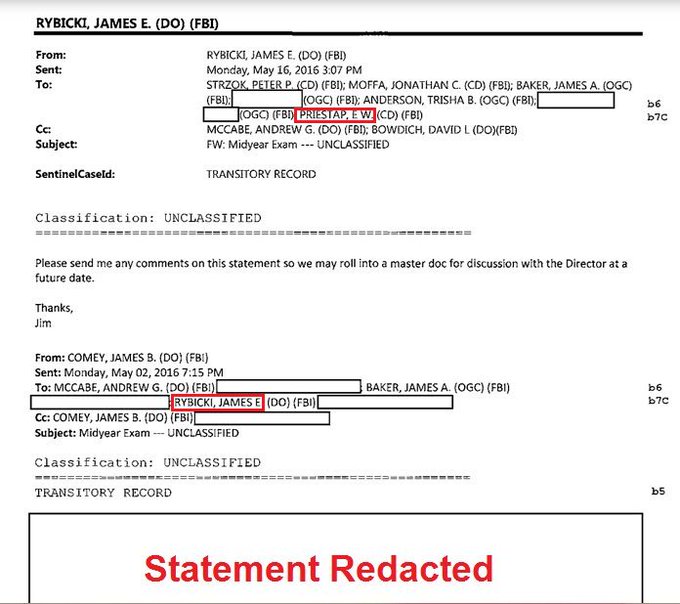 15) We do know that both #Rybicki and #Priestap were both involved in the crafting of James Comey’s infamous statement that exonerated Hillary Clinton.
(Note the other recipients #Strzok #McCabe #Baker and others including several names redacted)https://vault.fbi.gov/drafts-of-director-comeys-july-5-2016-statement-regarding-email-server-investigation/Drafts%20of%20Director%20Comeys%20July%205%2C%202016%20Statement%20Regarding%20Email%20Server%20Investigation%20Part%2001%20of%2001/view …

FBI counterintelligence agent Peter Strzok and was removed from the Mueller probe after an internal investigation found a trove of anti-Trump text messages between Strzok and his mistress, Lisa Page while they were both investigating Hillary Clinton’s email case.

Last year, the Justice Department sought to block Rybicki from appearing before Congress – defying requests from Senate Judiciary heads Chuck Grassley (R-IA) and Dianne Feinstein (D-CA), who were willing to keep the testimony to matters outside the scope of Robert Mueller’s ongoing investigation.

Six days before James Comey conveyed the FBI’s recommendation that the DOJ not prosecute Hillary Clinton, Loretta Lynch and Bill Clinton had an (almost) clandestine 30-minute “tarmac” meeting in Phoenix on June 27, 2016 Lynch had previously said was ‘unscheduled’ – described as an ‘ambush’ and that she ‘wouldn’t do it again.’

Emails released in December by the FBI reveal an internal effort by FBI officials to figure out who tipped off the media.

A series of emails show one FBI official, whose name and email are redacted, fuming over leaks to the media about the meeting and what happened on the tarmac. The official received an email from a “layman” alleging a local Phoenix police officer who may have talked to a reporter “sounds like a security threat.”

Officials went back and forth about finding out if the officer was SWAT or simply worked the motorcade and that “at a minimum” he should never work another detail again. One asked if local law enforcement assisting the FBI on motorcades should sign non-disclosure agreements in the future. Another official called an Observer article about the meeting, with details about how President Clinton got to Lynch’s private plane, “infuriating.” –Townhall

And in emails obtained by the ACLJ, we learned that Jim Rybicki was involved in the FBI’s damage control efforts.

One with the subject line “FLAG”was correspondence between FBI officials (Richard Quinn, FBI Media/Investigative Publicity, and Michael Kortan) and DOJ officials concerning “flag[ing] a story . . . about a casual, unscheduled meeting between former president Bill Clinton and the AG.” The DOJ official instructs the FBI to “let me know if you get any questions about this” and provides “[o]ur talkers [DOJ talking points] on this”. The talking points, however are redacted.

Another email to the FBI contains the subject line “security details coordinate between Loretta Lynch/Bill Clinton?”

On July 1, 2016 – just days before our FOIA request – a DOJ email chain under the subject line, “FBI just called,” indicates that the “FBI . . . is looking for guidance” in responding to media inquiries about news reports that the FBI had prevented the press from taking pictures of the Clinton Lynch meeting. The discussion then went off email to several phone calls (of which we are not able to obtain records). An hour later, Carolyn Pokomy of the Office of the Attorney General stated, “I will let Rybicki know.” Jim Rybicki was the Chief of Staff and Senior Counselor to FBI Director Jim Comey. The information that was to be provided to Rybicki is redacted.

Between Jim Rybicki’s involvement in the Hillary Clinton exoneration – six days after the infamous “tarmac” meeting he would later help contain the fallout from, Congressional investigators should have much to catch up on with James Comey’s old Chief of Staff.