Recently released Huma Abedin State Department emails – acquired by Judicial Watch via FOIA request, reveal Clinton State Department staff planning to summon New York Times reporter David Brooks for an “OTR” (off the record) conversation over a “shot” he took at Hillary in a Feburary 2010 article. This isn’t the first time we’ve learned of the Democrat apparatus wrapping their tentacles around the MSM, and it’s the second time in weeks Judicial Watch has delivered a bombshell. They’re doing good work.

“Took a shot at me in his column today. Any ideas what prompted it?”

“Not sure – but this is a good excuse to bring him in for an OTR [off the record] with you. Lona mentioned you wanted to see [NYT Journalist] Tom Friedman – with your ok, we could schedule both (separately) over the next month or so.

Phillippe and I had an offline conversation about this and I agree entirely. I think it makes sense for you to meet with influencers on a regular — though not intrusive — basis. An OTR conversation with you is the best way to help guys like Brooks ‘figure out’ how things work.

So a top Clinton advisor wanted to get ‘back in the habit’ of bringing people or groups in every few weeks? This clearly suggests the Clinton State Dept. was at some point regularly meeting with members of the MSM to discuss content. And how exactly did Hillary, assuming the ‘OTR’ meeting with David Brooks took place, help him to ‘figure out’ how things work? 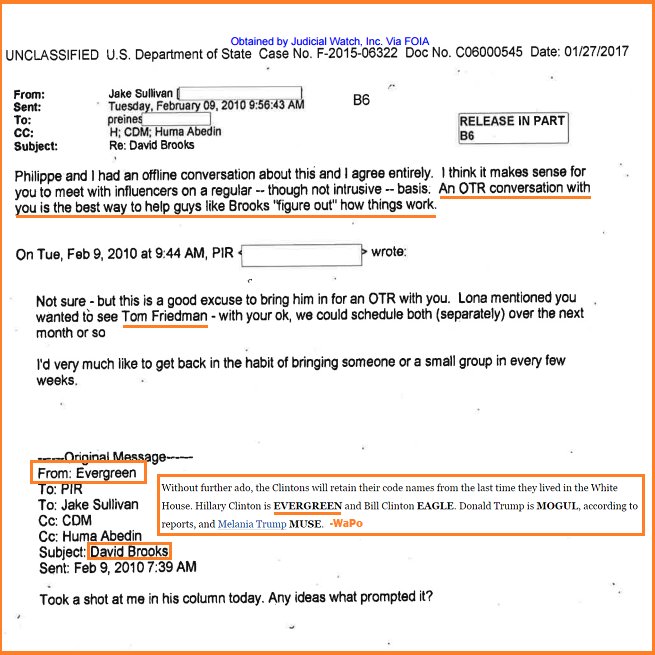